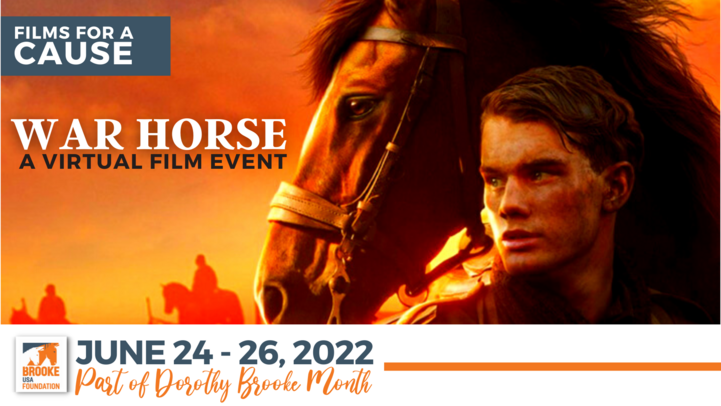 VIRTUAL EVENT: FILMS FOR A CAUSE: WAR HORSE

Platform: A designated sub-channel on the Equus Film Festival Channel, solely for usage by Brooke USA. In addition to War Horse the channel will feature additional documentaries, interviews and entertainment.

About the Movie: This tale of incredible loyalty, hope, and tenacity, directed by legendary director Steven Spielberg has continued to wow horse lovers and audiences around the world. Based on the Tony Award-winning Broadway play and set against the sweeping canvas of World War I, this deeply heartfelt story begins with the remarkable friendship between a horse named Joey and his young trainer Albert. When they’re forced apart by war, we follow Joey’s extraordinary journey as he changes and inspires the lives of everyone he meets. Filled with spectacularly rich visuals War Horse is a “Genuine movie masterpiece,” (Rex Reed, The New York Observer) and one of the most powerful and moving stories of friendship ever told.

The Legacy: Brooke USA works hand-in-hand with Brooke: Action for Working Horses & Donkeys and is founded on the legacy of Dorothy Brooke.

In 1930, wealthy Scottish socialite Dorothy Brooke followed her husband to Cairo, where she discovered thousands of suffering former British war horses leading lives of toil and misery. Brought to the Middle East by British forces during the Great War, these ex-cavalry horses had been left behind at the war's end, abandoned as used equipment too costly to send home.

We celebrate her life and legacy during the month of June, and we acknowledge her tireless work and passion as she rescued these noble creatures. After years of deprivation and suffering, Dorothy was able to provide respite in the Old War Horse Memorial Hospital, which she established in Cairo. She faced many challenges founding and maintaining an animal-rescue on this scale, but she never wavered, and the legacy of the Old War Horse Memorial Hospital and its founder endures today in the work of Brooke and now, Brooke USA Foundation. Join us in celebrating her life and legacy by lighting a candle, eating cake, and watching War Horse. 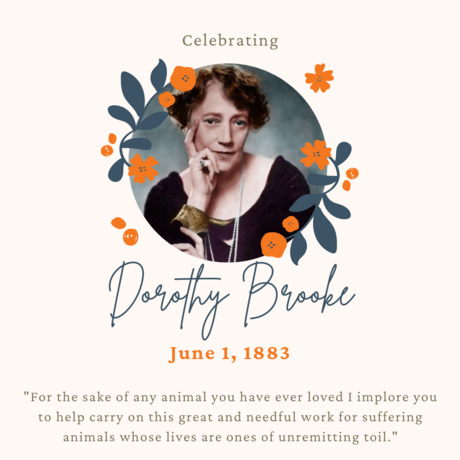 Before embarking on their new life in Cairo, our founder Dorothy Brooke had become aware of the fate of former war horses that were now languishing in poor conditions in Egypt. These horses had been born in the UK and were shipped overseas to serve in WW1, but they had never been returned home. The official reason at the time given for this was ‘lack of transport’, but it was a commonly held view that they were sold to Egyptian horse traders as the easiest option after the war, and many British horse lovers felt a sense of betrayal about this.

Now residents in Cairo, Dorothy felt a strong urge to seek out these horses and do whatever was needed to ease their suffering. It wasn’t an easy task at first – it took weeks of enquiries before she found her first one, an emaciated old chestnut horse with a clear army brand on his near quarter, whom she named Old Bill. He had served in Palestine once, but was in a terrible state now, with lifeless eyes and a gaunt frame supported by four shapeless swollen legs that trembled under his weight.

Dorothy went on to find hundreds of poorly and worn-out animals desperately in need of help. She set up the Old War Horse Campaign of Rescue, and began raising the funds needed to buy the horses from their owners, the first stage in lifting them out of a life of pain.

To raise more funds she wrote a letter to the Morning Post (which later became the Daily Telegraph) exposing their plight. The public were so moved they sent her the equivalent of £20,000 in today's money to help end the suffering of these once proud horses.

Within three years, Dorothy Brooke had purchased five thousand former war horses. Most were old, exhausted and had to be humanely put down. But thanks to her compassion, they ended their lives peacefully.

Dorothy Brooke knew thousands of hard working horses, donkeys and mules were still out there suffering, so in 1934 she founded the Old War Horse Memorial Hospital in Cairo, with the promise of free veterinary care for all the city’s working horses and donkeys. And that is how The Brooke Hospital for Animals was born, and from which Brooke USA Foundation was born.

Happy birthday Dorothy, and thank you!